At the End of the Fray

It’s the battle between Ash and Tyson to decide who moves on to the final four of the Hoenn League, and Glalie and Sceptile are already out! Tyson’s Shiftry is ill-matched against Ash’s Torkoal and its fiery attacks, but Tyson sends in Hariyama to beat the heat and defeat Torkoal. Corphish is next, but Hariyama defeats it too!

At the halftime break, Morrison tries to give Ash a pep talk. When the match resumes, Swellow and Hariyama battle until Swellow is the victor. Swellow then goes on to beat Tyson’s Donphan, but Tyson has a powerful Metagross waiting! Despite Swellow’s determination, Metagross knocks it out—but Swellow did some damage, and Ash sends Grovyle out to hammer on that weak spot. Grovyle still can’t stop Metagross but Pikachu finishes the job, so Tyson sends out the ace up his sleeve: his Meowth!

Team Rocket’s Meowth cheers its fellow Pokémon on from the stands. Tyson’s Meowth can counter Pikachu’s Thunderbolt with one of its own, so the battle comes down to Iron Tail vs Iron Tail. Exhausted, both Pokémon finally fall to the ground, and though they get back up, Pikachu cannot continue. Team Rocket’s Meowth is delighted, but not for long—Jessie and James have been caught stealing Pokémon by their new boss, who sends all three flying! Tyson goes on to win the Hoenn League and Ash, happy that he battled his best, can now look forward to his next big adventure. 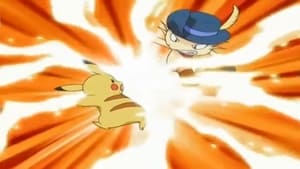