Before they leave Saffron City, the kids have different things they want to check out. May and Brock want to try some awesome noodles. Ash and Max want to check out a Fighting-type Pokémon dojo. Unable to fully agree, the two groups split up.

May and Brock arrive at the noodle place only to see the chef, Kyle, being dragged away by a girl named Terri. May, desperate for food, follows them with Brock. Meanwhile, Team Rocket have come up with their own noodle cart scheme, but abandon it when they see Ash and Max headed for the dojo.

At the dojo, Ash and Max are quickly drafted by Master Hamm into being students at the dojo, even though they just wanted a demonstration. Terri happens to drag Kyle in while Ash, Max, and Pikachu are cleaning the dojo’s floors. After May and Brock arrive, it is finally explained that Kyle is the son of Master Hamm, and that Hamm wants Kyle to take over the dojo. Kyle would rather make noodles. Unwilling to compromise, they decide to have a Pokémon battle to sort it out. Master Hamm’s back gives out as they start, so Ash offers to take his place. Kyle doesn’t like this, so May takes Kyle’s place.

Everyone is disappointed that the battle wasn’t finished, and Kyle admits he’s been trying to make noodles as good as his father’s all along. Terri offers to take over the dojo, since it happens that managing a dojo like that was her dream. It turns out that Master Hamm’s dream was to sell noodles from a cart. In the end, everyone gets what they want, including May, who gets to try some delicious noodles made by Master Hamm! 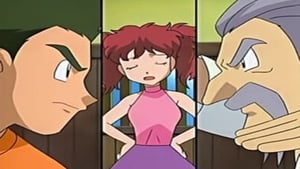