The Battle Factory is Ash’s next destination—if he can find it, that is. He and his friends have become lost, but they see snow and an Articuno flying overhead, followed by a plane in distress. The group winds up at a Pokémon Center, where Scott gives them a ride to the Battle Factory. There they meet Noland, who’s not just the Factory Head but also a bit of a mechanical mastermind, and the pilot of the plane they saw last night.

Ash can pick which of Noland’s Pokémon he wants to battle. Noland has befriended an Articuno whom he helped once, and he takes Max and Pikachu up in his plane to fly with the Legendary Pokémon. Team Rocket wants Articuno for themselves, and they show up in their own plane to steal it. It’s no match for Articuno, who quickly sends them on their way. 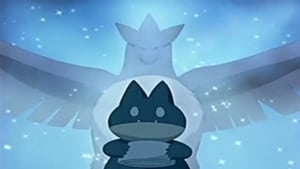