May and Harley face off in the main competition of the Grand Festival! It’s Harley’s Banette and Cacturne against May’s Beautifly and Bulbasaur. May’s team gets in the first hits, but Harley makes a comeback and it takes some quick thinking for May to beat Harley and move onto the semifinals.

Elsewhere, Jessie wants to impersonate a coordinator and sneak into the competition. Team Rocket decides to kidnap Robert, but Ash interrupts them as they make their move. Snorunt is hit by Team Rocket’s Pokémon and evolves into a Glalie! Jessie thinks it’s adorable, James thinks it’s creepy, but either way, Glalie easily sends them packing.

Back on the stage, May defeats Anthony’s Pinsir and Combusken, but her next opponent will be an even greater challenge: Drew! And Drew has brought a Flygon he trained especially for the competition. Flygon and Roselia are up against Combusken and Skitty. It’s a close fight but Roselia hits May’s Pokémon with Stun Spore, followed by a Steel Wing from Flygon, and takes the win.

Now it’s Drew and Robert in the finals. To May’s surprise, Robert earns the victory and wins the Festival. But Drew isn’t upset—that night, even though there’s a party, he goes right back to training. Impressed by his example, May sets her sights on next year’s Grand Festival! 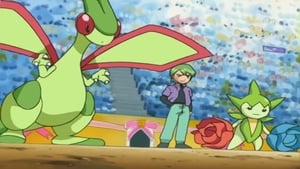