In a snowy region of Izabe Island, Ash and his friends take a rest at a Pokémon Center. As they’re greeted by Nurse Joy, a Snorunt steals Ash’s badges right out of his backpack! Nurse Joy explains that this mischievous Snorunt is just having fun, but Ash certainly isn’t. He sends Corphish and Pikachu to get his badges back, and the chase is on!

The chase leads to the kitchen, where Team Rocket is busy helping themselves to all the food. Snorunt sends the thieves packing before leaping out the window, hotly pursued by Ash. As Snorunt taunts Ash, it slips and falls down an icy slope. Ash manages to save it, but he’s knocked out in the process and his friends are unable to find him before a blizzard forces them back indoors.

Ash awakens in a snug snow shelter built by Snorunt. It swipes his hat and takes it to the Pokémon Center, alerting Ash’s friends. They follow Snorunt back to the shelter on snowmobiles but just as they reach Ash, Team Rocket grabs Snorunt and Pikachu! Snorunt breaks free, then helps Ash stop Team Rocket and save his friend.

It seems Snorunt stole Ash’s badges because it wanted to play with him. Ash invites Snorunt to join him, but first he must prove he’s capable of capturing this wily Pokémon. With Pikachu’s help, he does capture Snorunt—although it looks like this Pokémon may still be a real handful! 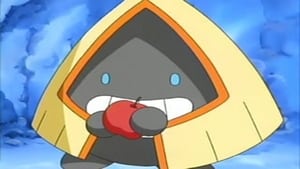