The Relicanth Really Can

The kids are relaxing at the Grand Wazoo Resort on Wazoo Island when a man emerges from the water completely covered in seaweed. His name is Adam, and he is a treasure hunter who believes he has just uncovered the location of the King Neptune, a cargo ship that was wrecked long ago.

Adam and the kids go searching for the wreck in a sub, secretly followed by Team Rocket in their Magikarp sub. Team Rocket fires a missile at them and zips ahead. Adam and the kids manage to find their way to the cavern where the ship is located, where lots of Relicanth have made their home. Adam finds a trunk. Team Rocket shows up again to take the trunk, also destroying the ship.

Team Rocket then destroys the exit to the cave as they leave, and heads to the surface. Adam’s sub follows the Relicanth out and catches up with Team Rocket. Angry at the destruction of their home, the Relicanth use Hydro Pump on Team Rocket, while Pikachu finishes them off with Thunder.

Opening the trunk, Adam discovers that the King Neptune was only carrying lots of Green Shards. Aside from that, he does have one real treasure to show for this adventure—the friendship of the Relicanth. 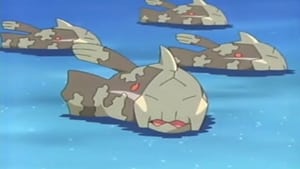