Once in a Mawile

Ash and friends continue their journey across Izabe Island, where they spot a giant stone Poké Ball atop a cliff. They meet a sage named Sigourney, who tells them the story of the giant ball. Once upon a time, a great destructive power was released, but was sealed inside a giant stone Poké Ball by a powerful sage and left in the lake.

Team Rocket overhears this and of course, wants to steal the giant Poké Ball. They show up at the lake and drop bombs on the stone ball, breaking it open. A huge Claydol emerges and headed toward the village, blasting energy that destroys everything in its path. Ash tries to catch it in a regular Poké Ball, but it doesn’t work, and neither does attacking it.

They realize they need to lure the Claydol toward the other giant stone Poké Ball. Team Rocket wants to help too, though they have their own wicked motives. Sigourney reads from an old book that Claydol likes eggplants, so Ash and James dress up as eggplants to lure the Claydol to the rock. It turns out Claydol actually hates eggplants, and they escape just in time. Next, they try to use beautiful maidens to lure the Pokémon in (also from the book), with May, Jessie, Meowth, and Wobbuffet dressing up. The Claydol ends up chasing Wobbuffet down a crevasse toward the Poké Ball. The kids push the Poké Ball down the hill, where it gets stuck. A combined attack from Mudkip, Lombre, and Pikachu frees it, and the stone ball finally rolls down to Claydol, capturing the giant Pokémon inside.

Team Rocket then tries to get away in their balloon with the giant Poké Ball, but it’s too heavy and they crash elsewhere. The ball rolls away, ending up in the middle of the lake. 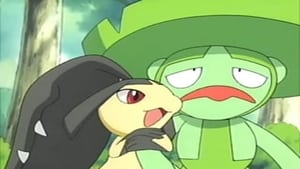